Uncle Sam Needs You!* *Who? 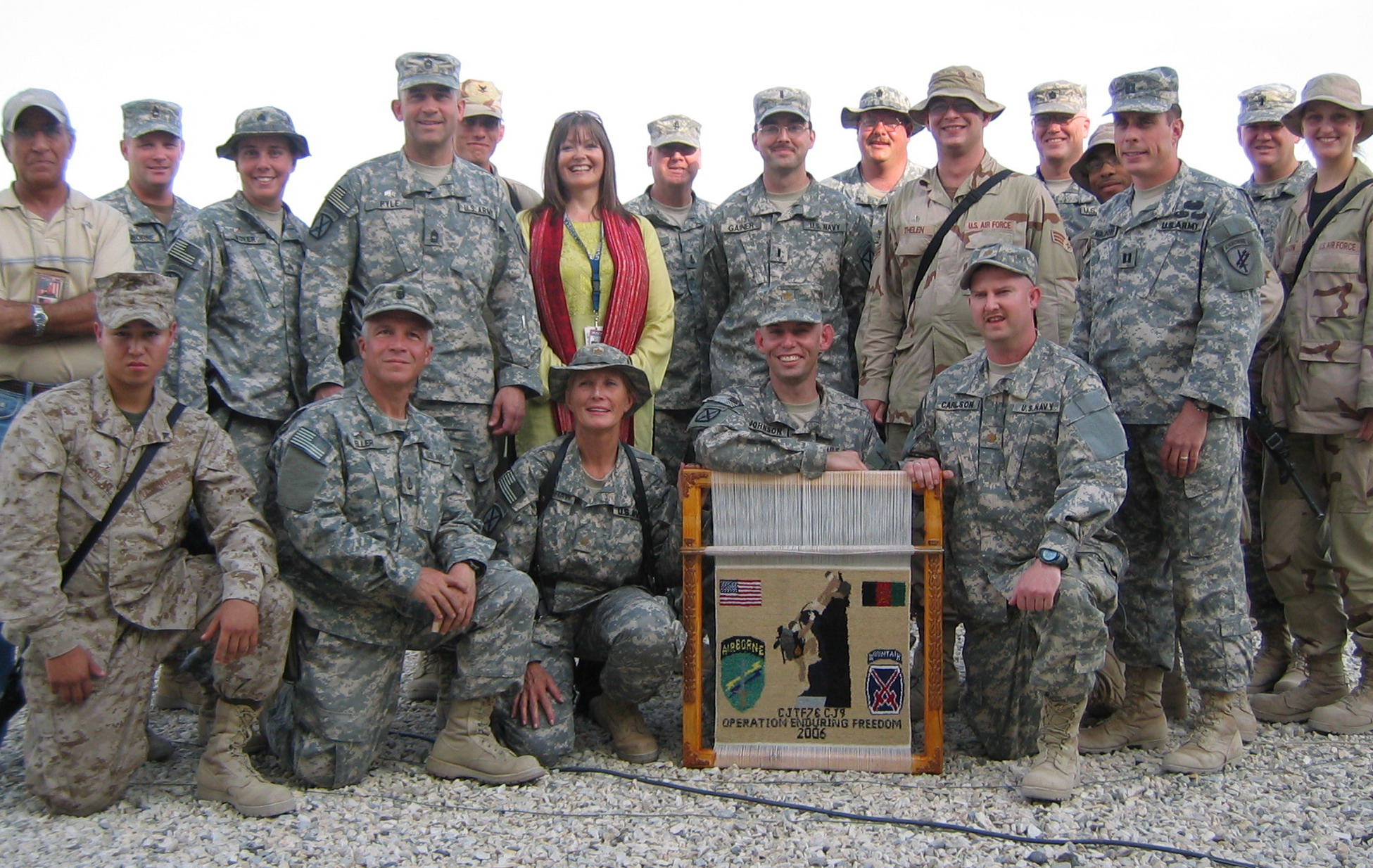 The world has gotten messier and there are not enough competent fingers to manage the leaking dykes. Unlike members of the armed forces, civilians can choose where they live and work. There are plenty of places in the world that people dream of going, so why do some civilians choose the least hospitable places on the planet? I’ve lived and worked in a few and continue to advise and mentor those who want to do the same by becoming international advisors working alongside governments, militaries, private-sector service and humanitarian aid agencies. It’s often physically and emotionally grueling, lonely, stressful and can be dangerous. So why do it?

It isn’t about being a saint or a hero (although I’ve met a couple,) or having a death wish that brings these people from their comparatively comfortable lives into places where misery, suffering and violence are endemic. In 2008, the term “soft power” spun from Harvard professor Joseph Nye, was at the center of discussion where I was serving in the Middle East. While allowing for the necessity of a strong and capable military, it emphasized the need to invest heavily in partnerships, alliances and the institutions and practices that serve them. These concepts were widely embraced in military and government circles. Since that time, foreign policy tools supported by national budgets demonstrate a shift in priorities.

Despite surges in regional instability, extremism and terrorism, the dollars and diversity of US investment in foreign relations-building that are necessary to strengthen bonds, defuse potentially explosive situations, calm populations and reduce the demands placed on our military servicemen and women have been significantly reduced. We remain in a rapidly changing security environment of hybrid threats combining the exploitation of legal loop holes, physical and cyber guerrilla tactics, predatory economic and propaganda practices, and the targeting of financial networks, the media, and political processes here and abroad.

Legislators remain attentive to the reactions of their voting base when promoting and allocating resources. The return to big spending on conventional weapons of war is increasing with the US in the lead, reflecting worldwide fears in response to international tensions among and between many traditional allies of the United States. Already strained relationships have been aggravated by the inflammatory nature of bombastic “America First” rhetoric, a largely incoherent foreign policy, and the apparent lack of central stability, as evidenced by the frequent turnover in the nation’s highest posts.

Correspondingly, dozens of US Embassies have been left without ambassadors, many in areas where seasoned diplomatic leadership is needed most, including those of long-term historical partners, such as Saudi Arabia and South Korea, as well as in places experiencing increased instability, e.g. Syria, Venezuela, and Sudan. It is far too easy for those in office and swivel-chair analysts to wrench focus away from the reigning confusion in policy and politics to place blame on religious, ideological or ethnic-tradition for the world’s troubles, but such broad-brush dogma leads to greyscale perpetuator/victim dichotomies when understanding requires recognizing the vast kaleidoscope of drivers, needs and resources at play.

While the US military provides exceptional breadth and depth of education and training to remain responsive, to succeed in its varied and complex missions it requires an informed citizenry and engaged civilians to bring their own valuable expertise to bear from numerous sectors of public and private enterprise. Much of this assistance is typically accomplished through interagency coordination. However, already understaffed and financially gutted to the bone, the 2018 proposed budget slashes funding for the arm of our government trained in diplomacy, the State Department and the US Agency for International Development, which sponsors the promotion of human rights, development assistance and emergency humanitarian aid, by an additional 25%. The Department of Defense budget includes an increase to a record shattering $639.1 billion. Most may assume that US military leadership is uniformly thrilled about this decision; the opposite is true. Since the Bush administration, there has been a push among lawmakers in the Beltway to sell an increase in defense spending on the Hill. For those in command on the ground, this has not always been good news.

In all government spending, including that of the military, those in positions of leadership must find ways to maintain their rate of expenditure (“burn rate”) to ensure that all the money that they receive is earmarked or spent before the next fiscal budget cycle begins. Legislators can consistently count on solid public support of proposed increases to the DoD budget because most Americans translate this to mean making their nation safer and taking better care of their service members. However, this isn’t how it’s playing out. If it were, the Veterans Administration and affiliated hospitals would have all the resources that they need, organizations that serve the needs of disabled veterans and their families would not be pleading for donations, all service members would be provided with body armor and winter warrior gear without having to pay for them out-of-pocket, homeless shelters would not have seen a rise in female veterans with children under their roofs, and the men and women who have served their country with distinction would not find themselves forced into early retirement with limited services and options available to assist them in finding subsequent employment.

As far as making our nation safer, depending on what you use for criteria, assessment does not bear that out, either. It is widely accepted that regardless of what are often good intentions, White House directed US military activity abroad has at times instigated or inflamed conditions on the ground amplifying and spreading insurgency that continues to threaten peace more broadly. We have seen an increase in the number of service members deployed and the number rotations served, which has resulted in a direct correlation to an uptick in PTSD, severe depression, suicide and the number of veterans and their dependents involved in domestic violence and homicide. Spreading destabilization has meant more military men and women sent in harm’s way. So inclined politicians often depend upon a two-pronged approach to keep these budget increases and redeployments from becoming too unpopular. They keep their constituents in a heightened state of anxiety by intentionally magnifying the danger to US citizens at home and hammering away with carefully crafted messages that military spending = patriotism = good American and equating the development/manufacturer of big-budget weapons & weapons systems with national pride.

War is and always has been big business. Even so, most Americans would be surprised to discover that the number one recipient of US-made armaments is Saudi Arabia, closely followed by the United Arab Emirates. Iraq, Egypt, and Turkey are also in our top 10 list of customers. In fact, the Middle East currently accounts for more than 40% of US arms exports, and experts believe this number will only grow due to the deep insecurity felt by these nations. Many of their political leaders are finding that the only way to get into and remain in office is to prioritize defense spending over that of allocating resources into that which is necessary to stabilize their nations, such as strengthening their economies to invite foreign investment, education required to inform and inspire the minds of their youth, supporting the civil society institutions critical to citizen participation in governance and the diplomatic sector essential to establishing and maintaining the global alliances vital to trade, security and international cooperation.

Here at home, it is through the research, development, sales and disbursement of weapons of war, everything from small arms to aircraft and naval vessels, that make keeping pace with the burn rate possible. Although it’s understood that the harder to quantify expenditures required for national resiliency and healthy democratic processes depend on solid international relationships and exhaustive civil/military cooperation, they simply do not cost enough to maintain defense spending at the astronomical rate now necessary to make sure that the next fiscal cycle does not include budget cuts (which can be wildly unpopular since legislators have sold such cuts as a betrayal to our military.) Plenty of people understand that going on this way is insane, wasteful and an abuse of taxpayer trust. Yet, the argument goes that the average American does not see the connection between the harder to assess nature of diplomacy or the correlation to security and prosperity that come from international assistance by way of sharing expertise, promoting human rights, supporting civil society, or the provision of technological and humanitarian aid.

This is obviously because they have not been taught to think this way. It is easier for powerbrokers to describe national safety being derived from the power-prowess that comes from producing/selling/stockpiling the latest weaponry and the numbers of boots we put on the ground abroad. I believe that despite what the media would have us think of one another, lawmakers are underestimating the public’s ability to grasp the facts. As servicemembers who have spent much of the last decade rotating in and out of war-zones can attest, as the quality and quantity of civilian experts providing support services in destabilized regions declines, the more the military is mired in the weeds of the low intensity warfare drumbeat of “winning hearts and minds” that has been at the center of cooperative military-civilian operations for nearly two decades.

With civilian support spread thin, or missing altogether, the armed services have become understandably increasingly resentful of the time and manpower that they need to expend in operations that they rightly see outside their purview. These forces were never intended to establish and maintain diplomatic engagement, mediate host population disputes, or support cooperative political processes. Nor have they previously been expected to have the means and know-how to navigate and address the myriad physical, social and political complexities of communities trapped in the midst of active insurgency without sufficient and consistent support of civilian counterparts at their side. Despite being “non-kinetic” in purpose, these types of missions can be particularly dangerous because times and locations are almost always prearranged, teams work in small, lightly armed groups, and are frequently far from support.

Even if all seems to go well during the engagement itself, violent fallout is common and can be disastrous. In many cases, unfortunate outcomes could have been avoided if qualified civilians had been made available to provide assistance. So, at last we come to the answer of the question: Uncle Sam Wants Who? My answer is: All of us. Why do civilians choose to go? Because it is the right thing to do. Every able-bodied adult of voting age holds some responsibility for our government, and each of us has skills and talents to share. Our military brothers and sisters should not have to go it alone. There is a need, not only in the US, but around the world for civilians and military members of all stripes to remind our leaders that the stability, security and prosperity necessary for peace requires more than building/selling arsenals and deploying troops. With insistence upon coordinated & cohesive foreign policy, we need decisions that honor and uphold our international commitments paired with responsible budgetary allocation to balance the military, diplomatic, development and aid sectors necessary to begin mending ruptured global relationships by using all of the tools at our disposal. With committed civilian assistance doing its job, militaries can focus on theirs. And finally, through renewed and more transparent Armed Services budgets that include ample financial support to our men and women currently in uniform, as well as veterans, we can begin to relieve their present undue burden.